Our Time: Success Stories of Washingtonians of Latino and Hispanic Descent 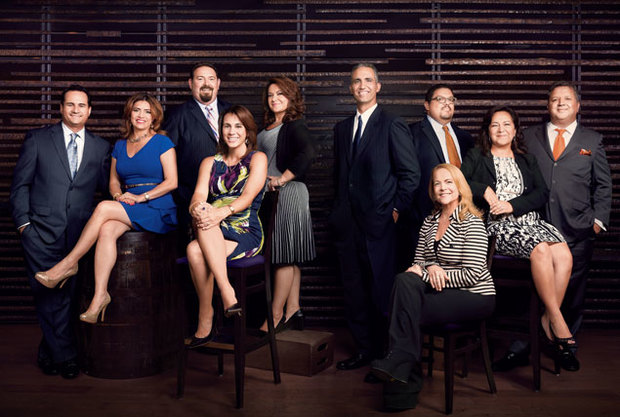 “At the intersection of the public and private sectors, there are established players such as the political strategist and commentator Maria Cardona, a respected voice on health care, gun control, immigration, and other issues; Janet Murguía, president and CEO of the National Council of La Raza; and Lorena Chambers, head of Chambers Lopez Strategies, the only Latina—and one of only two women—to have produced television commercials for a presidential campaign.

Direct and effusive, with the self-confidence of a veteran of many struggles, Chambers makes it clear she’s 100 percent Latina despite her surname, which came from an English ancestor who settled in Mexico. We’re meeting for the first time, checking place cards and shaking hands across a long, white-clothed table at the star-powered Women in the World dinner at Lincoln Center in New York. Chambers is seated across from me, and I can see right away that she’s a bundle of excitement, anticipating her own appearance the next day on a panel before an audience of 2,000 women.

The following morning, she’s onstage with Eva Longoria, talking about Latina power. Chambers gets off to a rousing start with an off-the-cuff remark that the nomination of Hillary Clinton for President in 2016 would turn even Texas into a blue state. She gets a huge round of applause. Longoria, who is far more serious than the vapid Gaby Solis she played in Desperate Housewives, reveals that she didn’t speak any Spanish until she had to learn it for a role, even though she grew up near the Texas border and is a ninth-generation Mexican-American.

Chambers, with Longoria nodding in agreement, makes the sharpest comment, saying that immigration isn’t a big issue for her, that it doesn’t affect her personally, but that she supports all Latinos and immigration reform.

Weeks later, over dinner at the rowhouse she and her husband, Ambassador Luis CdeBaca, have renovated in Georgetown, she elaborates. She says that anti-immigration arguments are insulting, especially the slurs against immigrants who are in the country illegally. Even when the jokes and smears aren’t directed at affluent Latinos like her, she says, “it offends me when people insult Latinos—any Latino.”

Chambers has every reason to be sensitive. She brought herself up from a middle-class Los Angeles neighborhood to UCLA and the University of Michigan, where she received a master’s degree in history and feminist theory. She boasts, defiantly, about her Chicano background and Mexican ancestry and doesn’t miss a chance to define herself as a Latina. She uses her background in her work for pro-Obama groups like People for the American Way and Priorities USA, creating Spanish-language advertising in battleground states.

But she’s not entirely happy with the marketing strategy. With new generations of Latinos who prefer to speak English and who know little or no Spanish, she wants to broaden English-language media campaigns targeting Hispanics.

Her husband, an ambassador-at-large and senior adviser to the Secretary of State, coordinates federal programs in the global fight against modern-day slavery, traveling the world and managing foreign-assistance programs of approximately $30 million dollars annually. He was appointed by President Obama in 2009 and served under Hillary Clinton. A framed photograph of CdeBaca and Clinton, signed by her, rests on the exquisite mantelpiece in their living room.

The ambassador, who is a handy cook—he prepared our salmon dinner—and a connoisseur of fine tequilas, has a law degree from Michigan and a bachelor’s from Iowa State University, where both of his parents taught. But the true family calling is cattle ranching, a 450-year tradition dating back to what’s now New Mexico, where his family has had a long history of public service. He followed in those steps when he applied to the Department of Justice honors program and was accepted straight out of law school.

One of Washington’s power couples, Chambers and CdeBaca are familiar faces in the busy whirl of the capital’s diplomatic circuit, hosting intimate dinners for ten at their home and on occasion throwing a blowout party, as they did last Christmas for 75 of their closest friends. With a combined 38 years in Washington, they have hundreds of friends, acquaintances, and contacts, and in a city where power and politics often define people’s worth, they have made it.”